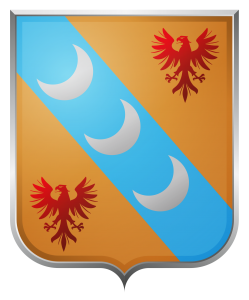 The coat of arms of the Association des familles Proulx d’Amérique is as follows:

Gold to a strip of azure laden with three silver croissants

And to make our coat of arms more personal, there are two added Eagles.

-Gold is the symbol of generosity and loyalty.
-The azure, celestial color, is the emblem of perfection. It symbolizes the aspiration towards a high ideal.
-The crescent, emblem of becoming, symbolizes progress, the effort stretched towards fulfillment.

It is necessary to step back in time towards 1980, an active period when the Sainte-Blandine Centennial Celebration Committee was preparing to mark the founding of the parish on October 28th, 1881.

Coat of Arms for the municipality of Sainte-Blandine were designed by Mr. Firmin Lepage, architect. They adorn the book “Une Histoire: Ste-Blandine”.

It was during this same period that Mr. Firmin Lepage obtained permission from Monsignor Adolphe Proulx to use the Coats of Arms created at his request while he was titular bishop of Missua.

Mr. Lepage, who had heraldic knowledge, created these Coat of Arms to identify the Proulx families from the lineage of Jean Prou and Jacquette Fournier.

Monsignor Adolphe Proulx derives his origins from his ancestor Jacob Proulx, a son of Ste-Blandine.

In 1996, the organizing committee of the Rassemblement des familles Proulx used the Coat of Arms designed for Monsignor Adolphe Proulx and adapted by Mr. Firmin Lepage during the great gatherings that marked the 300th anniversary of the parish of St-Germain de Rimouski.

On September 10th, 2008, at a meeting of the Interim Committee of the Association des familles Proulx d’Amérique (Proulx Family Association of America), Ms. Lucette Proulx-Lepage donated the Coat of Arms designed by Mr. Firmin Lepage, architect.

The same coat of arms was proposed and unanimously accepted by the members present at the very first general meeting of the Association des familles Proulx d’Amérique (Proulx Family Association of America).