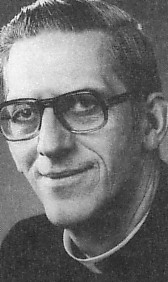 Our motto: “May all be one”, a beautiful legacy!

Our readers will have noticed this. In the banner of our website, after the name of our association appears a very small sentence. That is our motto: “Let all be one…”.

It was first the motto of the late Bishop Adolphe Proulx, a proud descendant of Jean Prou and Jacquette Fournier. He was successively Bishop of Sault Ste Marie, Alexandria and Hull between 1964 and 1987. His motto was transmitted to our association in 1996 by one of his relatives, Lucette Proulx. Her husband, Mr. Firmin Lepage, had adapted his coat of arms for our association.

Bishop Proulx drew his episcopal motto from a word of Jesus in the Gospel of Saint John (17:21): “that all may be one, as you, Father, are in me, and as I am in you, that they also may be one in us, that the world may believe that you have sent me”.

In writing his welcome in the very first issue of Figure de Prou in 2008, the founding president of our Association, Mr. Langis Proulx, had the idea of ending his post with the wish expressed by the motto of Bishop Proulx. I thought it fitted well with the identity of the Proulx Families of Quebec,” he wrote to us.

Indeed, this motto reflects what our association wants to be: the fraternal grouping of the descendants of our six pioneers to whom history, in time immemorial, has given the patronymic of Proulx to share. Not forgetting, of course, all those who have associated themselves with these Proulx.

Apparently, there is no relationship between our six Proulx pioneers. In any case, DNA tests have so far proved nothing.

But since the arrival of our pioneers, their descendants have sometimes mixed their blood! Thus, my three children descended by their father from Jean Prou and Catherine Pinel and by their mother from Jacques Proulx and Jeanne Pilon. Moreover, the maternal grandmother of my grandchildren is a Proulx descended from Jean Prou and Jacquette Fournier. In short, my grandchildren have three Proulx ancestors! Who says better?

That’s not all. Our president Florian is descended from Pierre Prou and Marie Gauthier, but also, I believe, by his mother, Jean Prou and Catherine Pinel. In short, we are cousins!

I am obviously very honoured!

To read in Figure de Prou: when a Wolfe soldier marries a Proulx who becomes lord!