The Association’s regional meeting held last Sunday in Longueuil was a great success. Thirty-two people from all regions of Quebec participated: from Bas-du-Fleuve to the Outaouais, from Saguenay to Montérégie via Charlevoix.

Most importantly and for the first time, descendants of each of our twelve ancestors, the six original Proulx and their wives, were represented. They were able to chat with each other during brunch taken in a beautiful and large room of a restaurant on St. Charles heritage street. 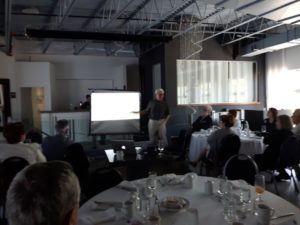 Our host, Jean-Pierre, made himself strong before the meal began to call each of the participants and participants by highlighting their respective lineage.

At the end of the meal, Jean-Pierre delivered the promised talk on L’École de nos ancêtres. He first introduced the religious institutions, both male and female, which, under both the French and English regimes, held a few “small schools” and colleges here and there until 1827. They allowed some of our ancestors, but not the first, to at least learn to sign their names!

Jean-Pierre also did some research to find educated Proulx. He thus traced the signature of some of them and in the first place that of François (1718), son of Jean and Catherine Pinel, and of his brother Joseph (1728). He also found the first Proulx who attended the Quebec seminary. It is Antoine, François’ son, ordained priest in 1751 and who is the inventor of the “I” of our patronymic Proulx!

In total, Jean-Pierre concluded, there were very few schools before 1827, the year of our first real school law and of which we are still the heirs, that is to say, a little more than a hundred for a population of some 300 000 people.

In conclusion, he invited participants to continue research on the education of their ancestors.

The regional meetings, formulas desired by our members, are certainly to be taken up again. They allow an effective fraternization of members, which is one of the essential goals of our family association.

Invitation and registration for the June 3rd regional meeting in Longueuil

Proulx of America, be on the lookout