On this beautiful Saturday, April 13th, my wife Lucie Plante and I left in the footsteps of an almost unknown Proulx. However, in the last half of the 18th century, Basile Proulx was an important construction contractor in Montreal and the West Island.

Our tour took us to Île Perrot to visit the church and presbytery of Sainte-Jeanne de Chantal parish, two historical monuments that he built there from 1772 onwards. In the BAnQ archives, we found 130 various notarial deeds, including 20 construction contracts. Among them are churches and presbyters, including those of Chateauguay and Île Perrot, who are still standing. This important fund remains virtually unexplored. There are a large number of deeds of sale, purchase of land or houses, rental leases, bonds, etc. 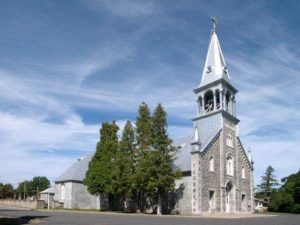 Basile Proulx was born in Saint-Augustin de Desmaures on March 25th, 1730 (PRDH) from the marriage of Alexis Proulx, son of Jean and Catherine Pinel of Neuville, and Isabelle Robidas-Manseau of Baie-du-Febvre. She was the daughter of Jacques Robidas-Manseau and Louise de Guitre. He married Geneviève Chénier de Lachine on January 30th, 1758. The couple then moved to Ste-Anne de Bellevue where their first children were born.

Without a doubt, Basile Proulx was also a skilled businessman. At the end of his life, he presented himself as a “bourgeois” from Montreal where he had settled with his family, mainly daughters, on Notre-Dame Street, not far from St-Pierre Street. His son Louis-Basile was the first Proulx to enrol at Collège de Montréal. His father died in 1808, three years after his wife Geneviève. His biography remains to be done.

Saturday, May 25th, everyone in Terrebonne!

Happy birthday to all our members born in May