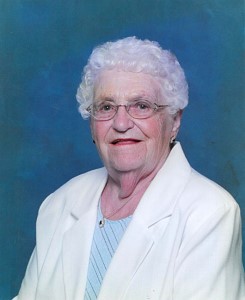 The family announces with sorrow her passing on June 13th, 2017 at the age of 92. She was the daughter of the late Napoléon Taillefer and the late Donalda Bergeron. Dear wife of the late Daniel Proulx. Cherished mother of Yvon (Mireille), Pierrette, Jacques (late Johanne), Diane (Donald), Suzanne (Marcos), Patricia (late François), Serge (the late Diane) and Maurice. Loving grandmother to 10 grandchildren. Beloved great-grandmother to 15 great-grandchildren whom she adored. She is survived by her siblings Annette and Pauline. Predeceased by her brothers and sisters: Aristide, Rolland, Corade, Maurice, Reina and Alice. She will be dearly missed by all her family, friends, neighbors and her 5 godchildren. The family would like to offer a special thank you to the one and only Dr. Louise Coulombe who has been like an angel on earth for all of us. The family invites relatives and friends for visitations on Sunday, June 18, 2017 from 2 p.m. to 4 p.m. and from 7 p.m. to 9 p.m. at Racine, Robert and Gauthier Funeral Home, 180 Montreal Road, Ottawa. A Funeral Mass will be held on Monday, June 19, 2017 at 11 a.m. at Saint-Sébastien Church, 1000 Frances Street, Ottawa. In memory of Rhéa Proulx, donations to the Alzheimers Society of Ottawa would be greatly appreciated.