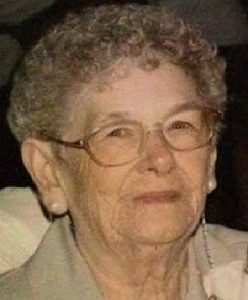 Passed away on October 10, 2016 at the age of 94. She was the wife of the late Wilfrid Proulx. She leaves in sorrow her children Marguerite (Rhéal), Cécile (André), André, Paul (Donna), Jean (Hélène), Susan, Kenneth (Nicole), Michel (Chantal), Gilles (Barbara), Jacques (Debbie), Nicole (Patrick), Denis (Lise), Roger (Louise) and Francine (Mario). She will be missed by her grandchildren, her great-grandchildren, her great-great-grandchildren, her sister Jeanette Ouellette as well as many nephew, nieces and friends. Family and friends may pay their respects on Sunday October 16, 2016 as well as on Monday October 17, 2016 from 2 p.m. to 4 p.m. and from 6 p.m. to 8 p.m. at Racine, Robert & Gauthier Funeral Home (180 Montreal Road, Ottawa). A Funeral Service will be held on Tuesday October 18, 2016 at 10: 30 a.m. at Notre-Dame-de-Lourdes Church (435 Montreal Road, Ottawa). The family will receive condolences at 10 a.m. on Tuesday. In Memory of Stella, donations to the charity of your choice would be greatly appreciated.