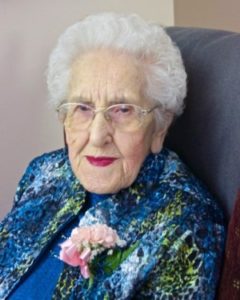 Marie ‘Sarah’ Delisca (Cayer) Proulx Peacefully on Monday, February 29, 2016 in her 104th year, at Sandfield Place in Cornwall, Ontario. Born November 7, 1912 in Marionville,ON. She was the daughter of Arthur Cayer and Alma Bouchard. She married Armand Felix Proulx on October 28, 1933 at St. Columban’s Church. Armand passed away on April 7, 1973. She is survived by one sister, Aurore (the late Harvey Lalonde). She is predeceased by ten brothers, (Aurel, Gerard, Leo, Romeo, Conrad, Lawrence, Albert, Maurice, Richard, Rene) and three sisters, (Albina, Aneda, Annette). She leaves to mourn, her daughter Annette (the late Ronald Bickerstaffe), son Ronald (Geraldine) and daughter Denise (André Hurtubise). She is survived by 14 grandchildren, 26 great-grandchildren, 15 great- great-grandchildren and one great-great-great-grandchild. Delisca worked for many years at Latour’s Grocery on Pine Street. She was a devoted mother, grandmother and great grandmother. She resided on her own until shortly before her 101st birthday at which time she moved to Sandfield Place. Resting at LAHAIE AND SULLIVAN CORNWALL FUNERAL HOMES, WEST BRANCH, 20 Seventh Street West, Friday, March 4th from 2 p.m. Funeral Saturday, March 5, 2016 for Mass of Christian Burial in St. Francis de Sales Church at 10 am. Delisca will be interred in Notre Dame Cemetery next to her husband, Armand. The family will be in attendance Friday, March 4th from 2-4 p.m. and 7-9 p.m. The family would like to express their sincere thanks to the staff at Sandfield Place where ‘Sarah’ resided these past two and a half years. In lieu of flowers, the family encourages donations to Open Hands, the Canadian Cancer Society or charity of your choice. Messages of condolences may be left at www.lahaiesullivan.ca