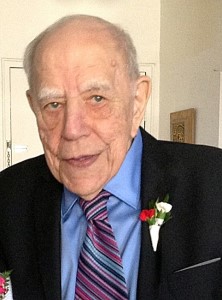 Passed away on October 31, 2016 at the age of 90. Beloved husband of Liliane Proulx (nee Gascon). Loving father of Dianne and Suzanne (Tony) Barone. Cherished grandfather of Vincent (Baylee) and Michelle (Ryan), and great-grandfather of Lina and Scarlett. He also leaves his brother-in-law Roger Gascon, his sister-in-law Jeanine Gascon, as well as many nephews, nieces and friends. Family and friends may pay their respects on Sunday, November 6, 2016 from 2 to 4 p.m. at Racine, Robert & Gauthier Funeral Home (180 Montreal Road, Ottawa). A Memorial Mass will be held on Monday, November 7, 2016 at 1:30 p.m. at St- Sébastien Church (1000 Frances Street, Ottawa). In lieu of flowers, donations to the University of Ottawa Heart Institute would be appreciated.