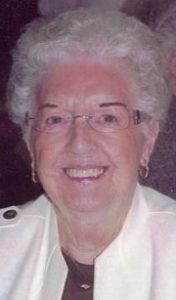 Gabrielle Shane was called to her loving master Our Lord with her family by her side on January 14th 2014, at the age of 87. She was predeceased by her parents Alcide Proulx (1970) and Eva Aubé (2002), her first husband Gordon Shane (1993), her second husband Alban Mainville (2006) and her brother Paul (1998) (late Ghislaine). Loving mother of Bryan (Patricia), David (Arlene) and Kenneth (Paula). She also leaves her step-son Jean (Lucienne), her dear sister Jacqueline Comeau (late Eugene). Cherished grandmother of Christopher, Amanda, Jonathan, Raven, Faye, Rock and Vickie and great-grandmother of Boston. Family and friends may pay their respects on Monday January 20th 2014 from 6 to 9 p.m. at Racine, Robert & Gauthier Funeral Home (180 Montreal Rd., Ottawa). A Memorial Mass will be held on Tuesday January 21st 2014 at 11a.m. at Annunciation of the Lord Parish (2414 Ogilvie Rd, Ottawa). The family will receive sympathies from 10:30 a.m. In Memory of Mrs. Shane, donations to the Canadian Cancer Society and Heart and Stroke Foundation would be appreciated.