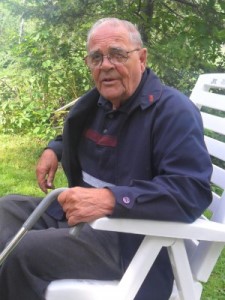 It is with great sorrow that the family wishes to announce the passing of Mr. Laurent Proulx, who passed away peacefully at the Kirkland & District Hospital, surrounded by his family, on Saturday, November 10, 2012 at 83 years of age. Laurent was born on May 2, 1929 in Kirkland Lake to the late Lea (nee St-Cyr) and Ernest Proulx. His struggles with health began at the age of 7 when Laurent was diagnosed with Polio, which caused paralysis in his leg. As a young boy he had many hardships and struggles which he later overcame in part due to an operation he received at the age of 14, that allowed him to regain his mobility and independence. Laurent was employed as a clerk with the Teck. Twp. Police Dept. and was eventually promoted to Court Administrator, where his duties included acting as Justice of the Peace. He retired after 40 years of faithful service due to health issues. He also enjoyed the many trips he and his wife took together through their 60 years of marriage. His travels brought him throughout Canada, the United States and also to Mexico where he was fondly know as “Senior Larry” by those working on the resort. Laurent was predeceased by his siblings Cecile St-Jean, Yvette Eckensviller, Gerard Proulx, Gilbert Proulx. He was also predeceased by his brothers in law Gilles Mainville, George Grise and Antoine St-Jean. Laurent is survived by his loving spouse Simone (nee Grise) Proulx and children Marcel (Joanne) Proulx, Robert (Gayle) Proulx, Lucille (Robert) Dolmovic and Francine (Peter) Milot. He is also survived by his grandchildren Lauren (Brian) Polk, Jean Paul (Kim) Proulx, Trevor Dolmovic, Michelle (Chris) Obieglo, Eric Proulx and Jocelyn Proulx, his great grandchildren Emma Claire and Warren Polk, Marissa Proulx and Claire Obieglo, his sister Jacqueline Mainville, niece Cindy Proulx as well as numerous other nieces and nephews. His love and guidance will be missed by all who knew him and he will be missed not only by his ever loving family but also by his many friends including his neighbour’s Bill and Doris Uhrayn, who have been by the family’s side throughout the many struggles. The family will receive relatives and friends at the French Family Funeral Home (111 Burnside Dr. Kirkland Lake) on Tuesday, November 13, 2012 from 7:00 to 9:00 p.m. A Funeral Mass will be celebrated at Paroisse Assomption on Wednesday, November 14, 2012 at 11:00 a.m. Laurent will be laid to rest in the Kirkland Lake Cemetery at a later date. A reception will follow in the French Family Reception Centre. Donations in Laurent’s memory may be made to the Heart & Stroke Foundation (2300 Yonge St. Suite 1300 Toronto, ON. M4P 1E4). The family wishes to express a heartfelt thanks to the all the nurses, physiotherapists and doctors at both the Kirkland & District Hospital and the Timmins and District Hospital, with a special thank you to the nurses in ICU and on the 4th floor at the Kirkland Lake District Hospital and to Dr Jeffremova who helped guide Laurent and his family through his final journey.