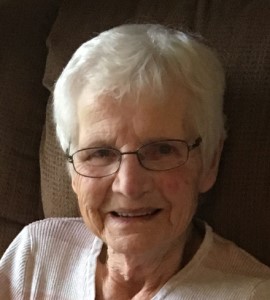 Catherine (Pelchat) Proulx was born November 25th, 1928 at home in Shell River, SK.  She was the third of four children born to Pierre and Leofile Pelchat.

Catherine started her schooling at Shell River School until it became too cold for her to walk.  Her parents decided to send her to The Sisters of the Presentation of Mary Convent in Duck Lake, SK where she finished her schooling.  Upon returning home, Catherine met Pierre Proulx.  They were married on June 13th, 1950.  After their marriage they settled on the farm and started their family.

Catherine was a hard worker and never complained.  She loved being outdoors and was a constant provider to her family.  She spent her days taking care of her family as well as many daily chores: tending to the chickens, milking the cows and gardening.

Catherine was very family orientated.  One of her favorite family outings was to go with her children and grandchildren berry picking.  She also loved to cook and you never left her home hungry.  Holidays were a special time for her as the whole family gathered together on the farm to celebrate.  Catherine loved her sweets, she always had a variety of candies close by and she loved to spoil the great grandchildren with jujubes and suckers.  She cherished her time with her grandchildren and great grandchildren.  She had the patience of a saint and was always happy to bake cookies or make bread with them regardless of how many hands were in the dough or how much flour ended up on the floor.
Catherine passed away peacefully surrounded by family in Saskatoon at the Royal University Hospital just before midnight on November 15th, 2018, ten days shy of her 90th birthday.